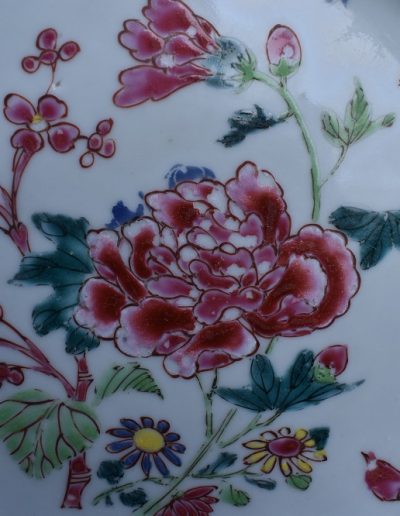 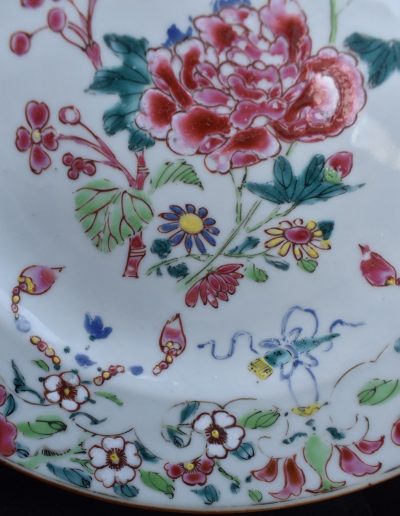 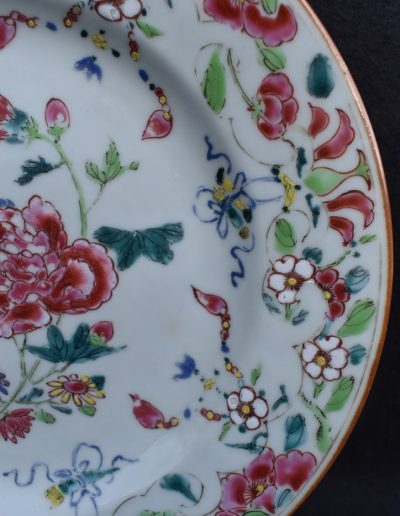 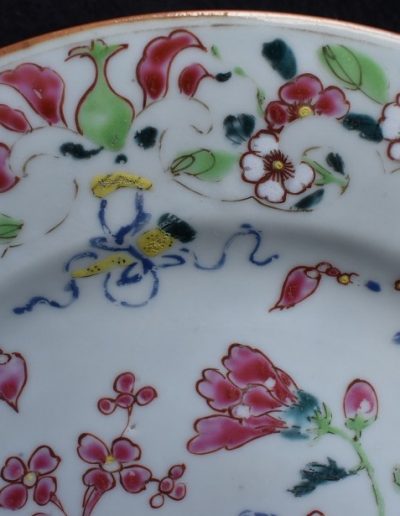 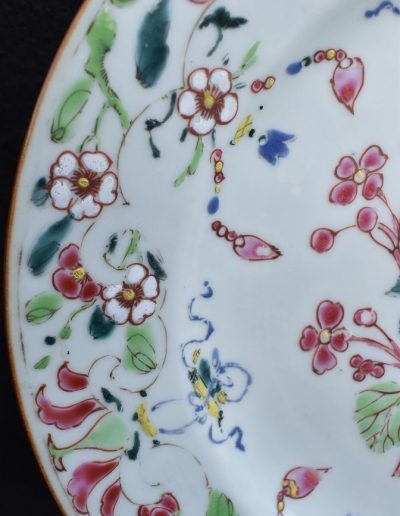 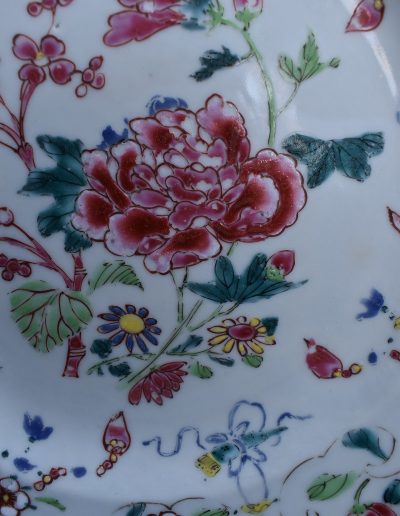 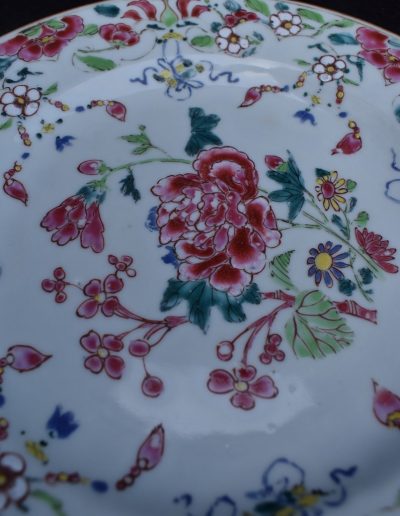 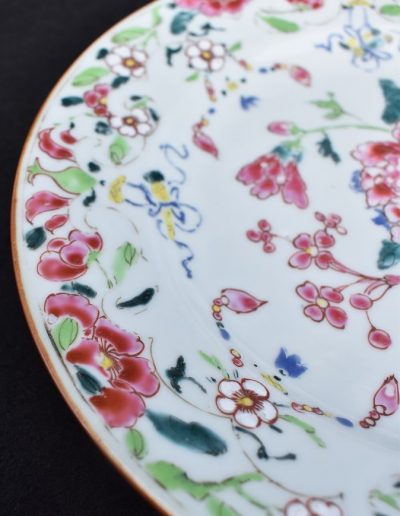 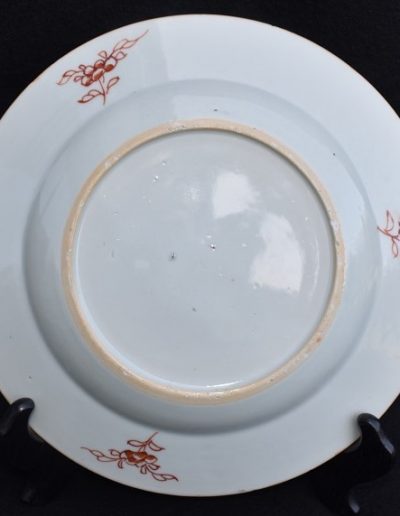 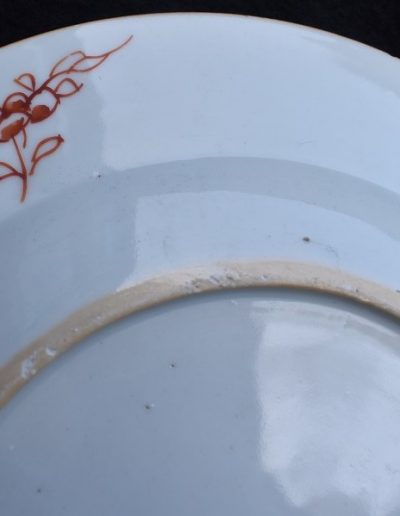 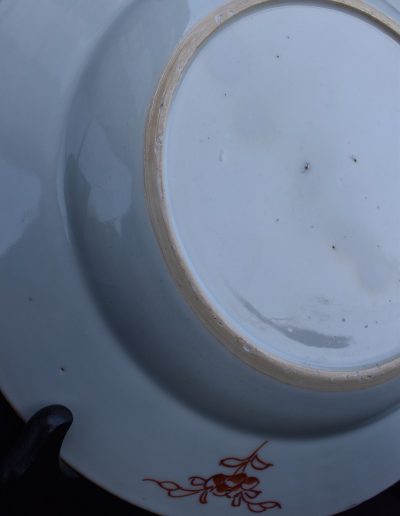 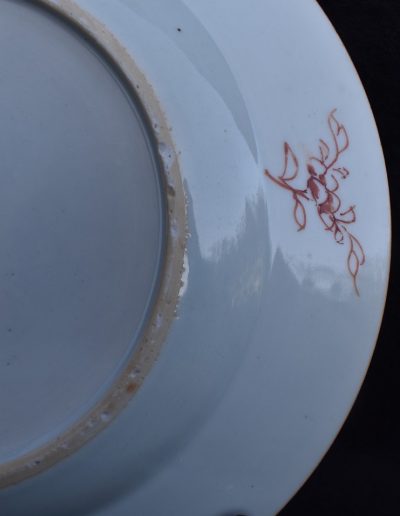 Famille rose (French: “family of roses”) is the group of Chinese porcelain wares characterized by decoration painted in opaque overglaze pink colors, often with shades of pink and carmine. These colors were known to the Chinese as yangcai (洋彩, “foreign colors”) because they were first introduced from Europe (around 1685). The enamel paint used was originally the type of glaze applied to metal wares, such as cloisonne, and was adapted to porcelain after it entered China. By the time of the reign of Yongzheng (雍正, 1722-35) in the Qing Dynasty (1644-1911), these shades were favored over the translucent famille verte (five-tone wares) overglaze colors previously used. Famille rose porcelain reached a pinnacle of perfection in Jingdezhen under the direction of Nian Xiyao (年希堯, ?-1739) and Tang Ying (唐英, 1682-1756), continuing with great delicacy through the Qianlong (乾隆) period (1735 -1796). Today, the term fencai (粉彩, literally “pink color”) may be used more often and is almost interchangeable with yangcai (洋彩). However, Fencai did not appear in official records until the early 20th century. Shown is a Chinese porcelain round plate. The pâte is covered with a snow-white glaze. It is overglaze polychrome hand decorated with a floral famille rose decor. In the flat we see a large peony with green foliage and stems. Also prunus flowers. The transition is also sprinkled with lotus plants and the border is completely painted with a floral pattern including white enamelled flowers. There are overglaze cobalt blue elements. We also see four green vases bordered in iron red. The lip is painted brown, as is often the case for Kanton export porcelain. The back has a bluish glaze, except for the base ring. Three flowered branches are painted in iron red on the border. The base ring has a typical Chien Lung character. The sign is not marked. It dates back to the Qing Dynasty, Chien Lung Imperial Period, ca.1750.

Condition: light fritting on the lip, some chips on the base ring, otherwise good condition.