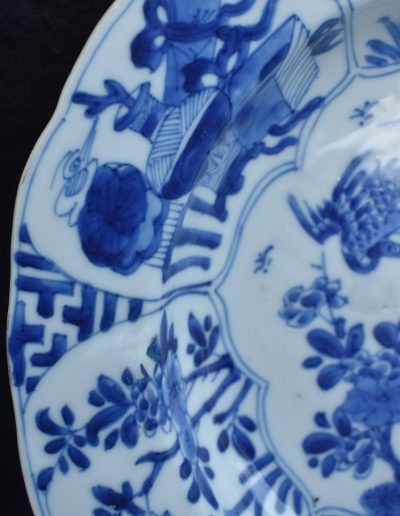 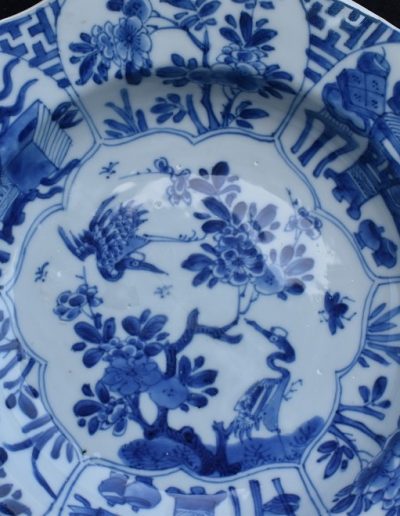 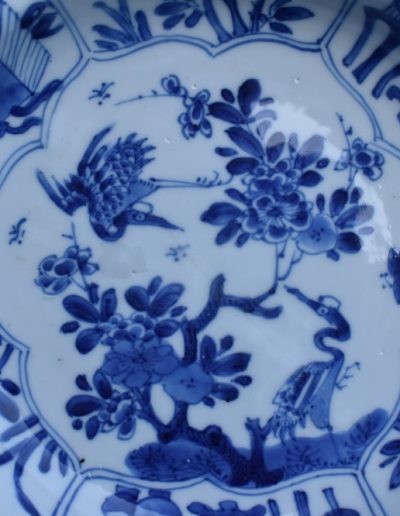 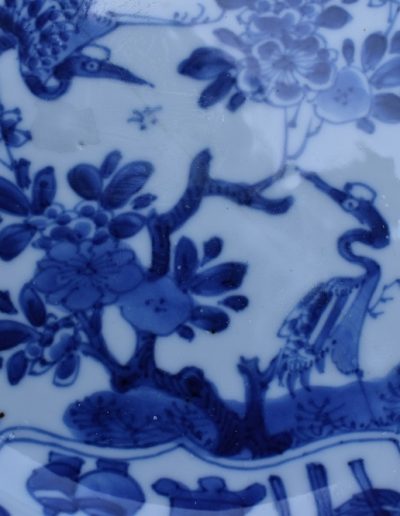 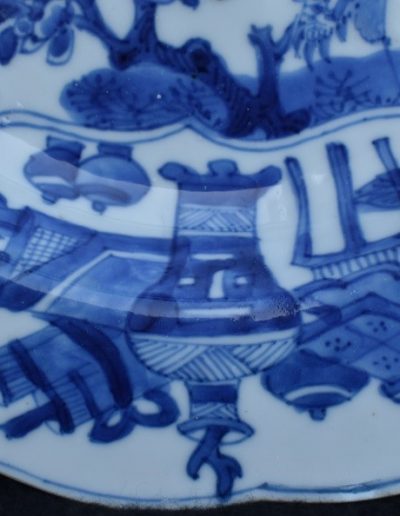 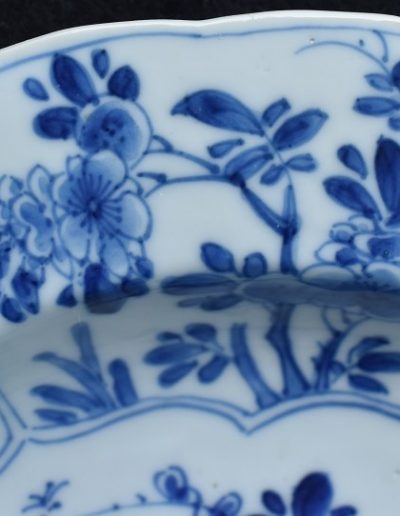 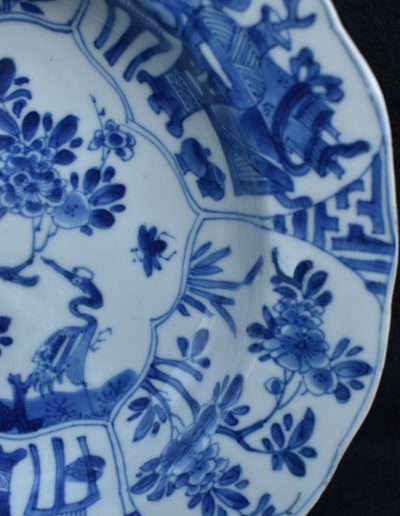 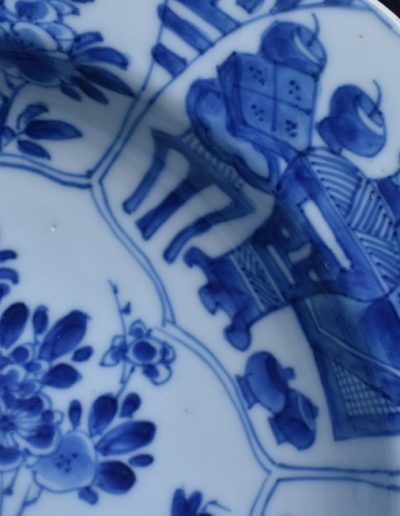 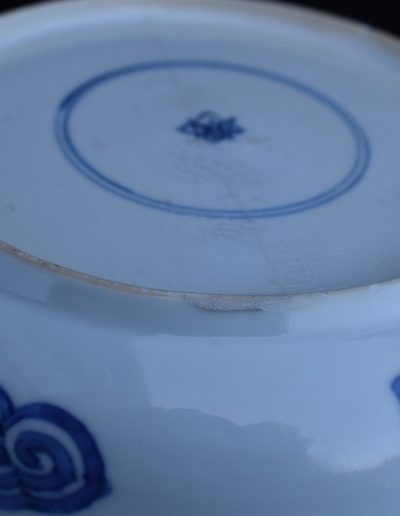 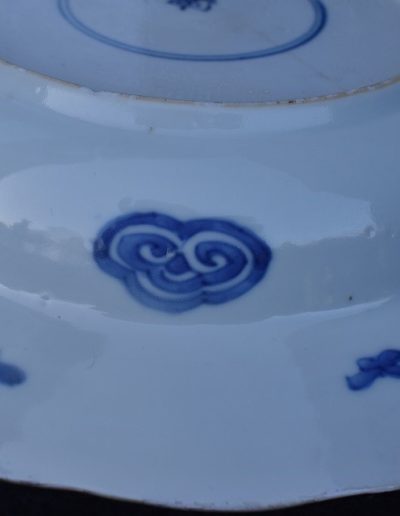 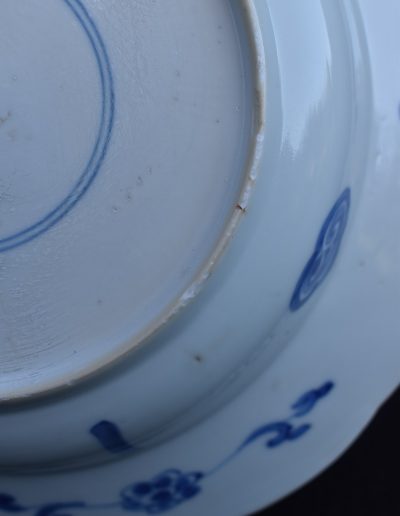 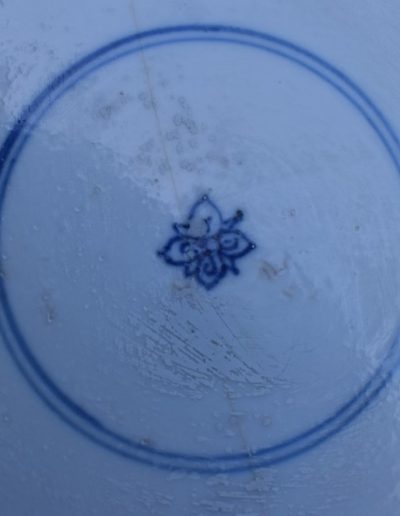 A hooded hat is a bowl with a turned-out rim. There are two types: high and low. The low ones most resemble an extra-deep dinner plate rather than a bowl. The Chinese kraken porcelain is usually unmarked and mainly consists of plates and bowls. The bowls are subdivided into so-called crow heads and hooded hats. Bowls with a decoration of a crow are called crow’s heads. Hoods are bowls with a brim that is “flapped out”, the name probably referring to the similarity in shape to a popular headgear at the time. Chinese porcelain hoods were only intended for export to Europe, the shape was new in Chinese porcelain. The raak porcelain is characterized by the pale, varied blue tones. The color of this blue-and-white porcelain comes from cobalt. The decoration on the Chinese plates and dishes is usually divided into segments on the edges, with a central scene in the middle. The Chinese vases, plates and saucers are extremely fine and therefore fragile due to their thinness and fragile edges. Kraak porcelain was produced under the emperors Wanli (1572-1620), Taichang (1620), Tianqi (1620-1627) and Chongzhen (1627-1644) of the Ming dynasty. With the fall of the Ming dynasty, the export of raak porcelain decreased. Even so, at the beginning of the Qing dynasty (1644-1912) crack porcelain was still being produced. Shown is a Chinese porcelain high hood with wavy brim. It is hand painted with an underglaze sapphire blue and white Wanli type squat decoration with the transition and border divided into panels. The shelf is painted with a rock from which a bush of peonies springs. An insect flies in the air. Two stylized cranes are painted on a branch and in the sky. The six panels are alternatively painted with a bush with leaves and flowers, and on the other hand various Buddhist valuables such as censers, paper rolls, vases, books, … Between the panels we see geometric motifs. The back is glazed light blue except for the base ring. The border is painted in dark cobalt with four flowered branches. The transition shows stylized lotus flowers and thick vertical stripes. In the center the plate has two concentric circular lines, marked with a four-lobed leaf motif. This plate dates from the early Kangxi Imperial period, late 17th century.

Condition: dull stain on the cover, fritting at the base ring, almost invisible hairline across the center at the back, otherwise in very good condition overall.